Wave of the Future: Surfer Maya

Bobbing in the South Atlantic, her partner, Carlos Burle, 42, still half unconscious after losing a battle with one of the first waves of the day, Maya Gabeira considered turning back. From the seat of her Jet Ski, the 22-year-old Brazilian watched as South Africa’s Dungeons break swelled to 50 feet. Holding on behind her, Burle was badly shaken: “I almost died,” he said over and over.

Then the sun came out, and Gabeira spoke up: “Can you drive?”

Gabeira, the only sponsored female big-wave surfer in the world, began her career in earnest at the age of 17, when she left Brazil and set out alone for Hawaii. Read the story and watch the video >> 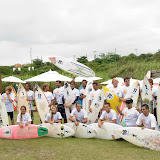